If you're an engineer just starting your foray into the mixing world, it's likely that you have a solid foundation of technical knowledge and mathematical skills that will help you be successful in your career. But beyond your education, it's a new world with terms they didn't teach you and practical everyday tasks that are unfamiliar.

The mixing industry is as diverse as it is complicated. Fluid dynamics, mechanical engineering, and even unexpected practical issues are a part of almost every day. Mixers are an essential part of many products in many industries from food and dairy to pharmaceutical to specialty chemical, and the list of quality consumer products made by a mixer goes on and on.

This glossary of terms is meant to be a brief overview of terms you might hear in day-to-day conversations, but there is so much more to mixing than just these 38 terms. Click the link at the end of the section for more information about that section's topic.

Jump to a Term Definition

Flow and shear are two of the most frequently discussed characteristics of mixers and impellers. There are all kinds of classifications for mixers and their applications, but flow and shear describe the basic way in which your product is physically mixed. Flow describes the rate at which fluid is moving through a mixing system as well as the pattern of the liquid’s path through the tank.

Shear measures the effect of two objects moving in opposite directions while in contact with each other. The motion of impeller blades coming into contact with the fluid causes shear. Mixing primarily happens around the impeller blades where the shear is highest. Too much shear can cause electrostatic buildup, attrition, and overlubrication depending on your ingredients. [source]

“The angular velocity that excites the natural frequency of some rotating object.” In other words, the faster a mixer shaft rotates, the closer it will get to vibrating in a way that could critically damage your equipment and product. [source]

A measurement of the average velocity of a larger amount of fluid (as compared to an individual point within the fluid). For example, a bulk fluid velocity calculation could describe how quickly fluid is flowing from the inflow to the outflow of a mixing system.

When a force is applied to one layer or one particular area of a fluid body, shear causes that part of the fluid to increase its velocity relative to other areas within the body of the fluid. Shear refers to the force being tangential, while Stress refers to the ratio between the force and the area that it is acting upon. Stress = Force/Area. [source]

“A measure of a fluid’s resistance to flow, it describes the internal friction of a moving liquid.” For example, water pours out of a cup very quickly, but molasses will take a long time to pour out of the cup. [source]

A ratio describing the difference in density between water and another liquid at a certain temperature. Specific gravity is measured using a hydrometer. [source]

Horsepower is defined as approximately 550 foot-pounds per second (i.e. lifting a 550 pound weight a distance of one foot in one second). [source]

“Torque is a measure of how much a force acting on an object causes that object to rotate.” [source]

Cleaning-in-place is “the use of a mix of chemicals, heat and water to clean machinery, vessels or pipe work without dismantling the plant” and in many cases the equipment itself. [source]

Wetted parts are the parts that come into contact with the content of the tank. For example, an impeller would be a wetted part, but the gearbox would not.

A debris well is meant to capture any debris from within mechanical seals before it falls into the product. According to Tom Adams at De Dietrich Process Systems, in “many Pharmaceutical applications (or others where preventing contamination of the batch contents is critical), the particles being generated due to seal face can be problematic… its purpose is to catch a high percentage of the carbon particles before they fall into the reactor contents.”

Tri-Clamps are one of the most common ways to mechanically join pipes, fittings, valves and other equipment that needs to remain sanitary. [source]

USP stands for U.S. Pharmacopeial Convention. According to their website, USP “sets standards for the identity, strength, quality, and purity of medicines, food ingredients, and dietary supplements manufactured, distributed, and consumed worldwide. USP standards matter for pharmaceutical mixing equipment because their standards are enforceable by the FDA. 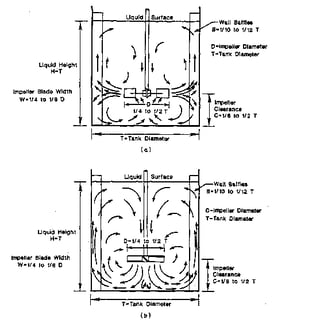 Flow pattern refers to the path the liquids and other contents take when the mixer is running. The two typical flow patterns are radial flow and axial flow. See the image below for an example of the difference between (a) radial and (b) axial flow. [source]

Liquids in this region are usually transitioning from turbulent flow to laminar flow or vice versa, hence the name “transitional”. Generally speaking, transitional flow has a mid-range Reynolds number and medium flow velocity compared to other areas in the tank. The Reynolds number is typically between 100 and 20,000 depending on the liquid and other factors.

A region in a tank “in which the fluid travels smoothly or in regular paths.” Generally speaking, laminar flow has a low Reynolds number and low flow velocity compared to other areas in the tank. The Reynolds number is typically less than 100. [source]

“Rotor-stators consist of a fast-spinning inner rotor with a stationary outer sheath (stator) to homogenize samples through mechanical tearing, shear fluid forces, and/or cavitation (the rapid forming and collapsing of bubbles).” [source]

A “gearbox is a mechanical device used for torque increase/decrease via speed reduction/increase.” Perpendicular shafts are connected by gears configured to produce a desired output and often to change the direction of the input force. [source]

Impellers are the blades attached to the shaft of the mixer that propel and mix the liquid in a tank. For more information on impellers and the different kinds of impellers check out our blog post all about impellers.

Dissolution is the process of dissolving commonly used in pharmaceutical, food, and other mixing applications. Typically, solids are dissolved into a liquid solvent through a combination of flow and shear that maximize the rate of mixing.

In batch processing systems, ingredients are added all at once or in a back-to-back manner, and the completed batch is removed from the tank all at once. Batch mixing is commonly used in brewing and specialty chemicals among other industries.

Continuous mixing describes a mixing system in which ingredients and products are continually flowing into and then out of the system. [source]

Baffles are vertical panels attached to the inside of the tank to prevent solid body rotation of the fluids being mixed. Having baffles greatly increases the efficiency of your mixer in both radial and axial flow pattern applications.

Bypassing is when a significant amount of fluid doesn’t spend enough time in the area of the system where mixing occurs. While bypassing isn’t seen in batch mixing systems, continuous and semibatch systems can fall prey to this nonideal flow issue.

Channeling is when a majority of the fluid goes through a small ‘channel’ of a continuous or semibatch mixing application. This could be due to the flow rate being significantly greater in a specific channel within the fluid. If some materials have agglomerated on the walls of the tank, pipe, or column, then the final product with have issues with homogeneity.

These are areas within the mixing fluid that are stationary and stagnant due to materials adhering to the walls or corners of the tank. Material agglomeration is also a type of dead zone formation. Dead zones are problematic because they prevent adequate mixing. This can make for both wasted product components and can cause products to fall short of your high quality standards. [source]

Miscibility is when liquids will completely dissolve into one another at any concentration. When mixing miscible liquids in pharmaceutical applications and others high flow and low shear is the target to hit in impeller selection.

Solubility is the “degree to which a substance dissolves in a solvent.” Reaching the saturation point in chemical and pharmaceutical mixing needs to be taken into consideration before mixing to avoid wasted materials or reduced product quality.

Suspension refers to the mixing of insoluble materials such as dyes and solvents like water in the paint industry. Suspensions give up physical stability in comparison to solutions, but they have a lower risk of become chemically unstable because there is little chemical bonding that occurs. Because of their relative physical instability, suspended materials can settle and require another round of mixing, stirring, or shaking.

The process of dispersing solid materials into a liquid. Dispersion requires high shear because of a solid’s tendency to agglomerate during mixing. That’s why dispersion blades are uniquely designed to cut through whatever they come into contact with much like a table saw would.

Knowing how your tank works and how to care for it will improve the lifespan of the tank. Click here to download this free guide to help recognize and prevent wear on your stainless steel tank or visit our webstore for more info on mixers.

At Paul Mueller Company we are united by a belief that the only quality that matters is quality that works for life. With every piece of processing equipment we build, our goal is to have lasting impact. From solar milk coolers in rural Africa, to lifesaving medical technology we are making an impact across the globe.